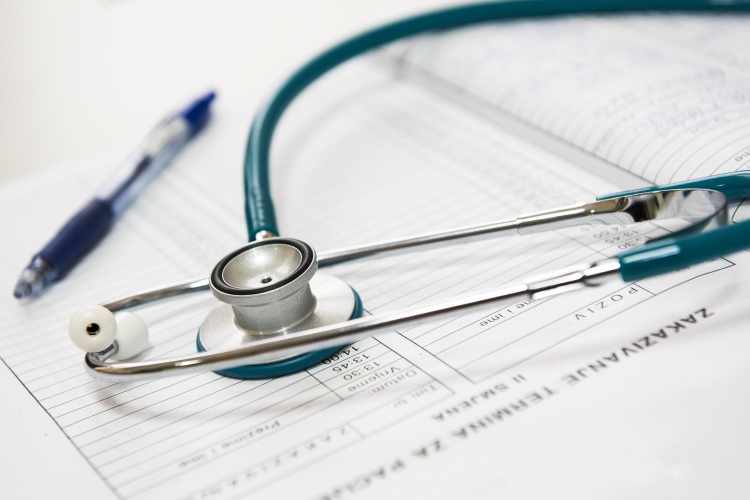 I wanted to write a post about our recent medical experience and Izzy’s diagnosis of laryngomalacia, in case any other parents are currently going through it. Before we had all of our tests and appointments, I was so scared and would have loved to read something from another mom. So, I hope this helps anyone out there who is concerned about their baby. ❤

When Izzy was a newborn, she made a squeaking sound when she cried. It was always on the inhale, so she would cry (waaahh) and then breathe in and squeak. The doctors at the hospital commented that it was relatively normal, so we weren’t too concerned about it. Instead, we joked that she sounded like a bird, which is why we started affectionately calling her Izzy-Bird (and we still do today).

The noise eventually went away over the course of the next few weeks, but it came back a couple of days before she turned 4 months. This time, she would still squeak while inhaling, but it was during a lot of other circumstances. Usually, it would happen when she was lying on her back, either playing or laughing, but it was much louder than her newborn squeak. Sometimes, it sounded like she was struggling to get a breath — a possibility that would undoubtedly scare any new parents.

Her sounds hit a peak right before New Year’s Eve, and naturally, our pediatrician’s offices were closed. I made the mistake of googling (rule number one: don’t ask the internet anything when it comes to your baby’s health), and naturally worked myself up into a panic. We called our doctor’s 24/7 answering service, who suggested we go to the ER just to be safe.

At the ER, the doctors listened to her heart and lungs, and measured her oxygen levels — all of which were perfect. They explained to us that the sound she was making was called an inspiratory stridor, which is another name for noisy breathing in babies. There are several reasons why a baby might do this, but because Izzy didn’t have any symptoms of being sick, the ER doctor suspected that she likely had laryngomalacia.

Of course, since I had spent the afternoon on Google, I’d read all about it. Laryngomalacia is essentially when a baby’s tissue above the larynx is soft, or floppy. When a baby breathes in, the floppy tissue vibrates, and causes them to make a noise. In most cases, it’s harmless, and the baby grows out of it as their body develops. In some cases, it’s severe, requiring surgery (a worst case scenario that my mind had already jumped to).

After a follow-up with our pediatrician (who told us over and over not to worry), we were referred to an Ear, Nose, Throat specialist at Boston Children’s Hospital. There, they performed a nasal endoscopy (or, scope) on Izzy — a test that certainly bothered me much more than it did her. They had to stick a little tube with a camera through her nostrils to take a look at her throat. All in all, the test lasted probably 10 seconds, and she was such a trooper — she barely cried at all, and by the time it was over, she was smiling at the doctors.

Luckily, Izzy’s laryngomalacia is not severe (it doesn’t interfere with her feeding, and she’s gaining weight appropriately). The ENT specialist said that she will likely grow out of it, and we wouldn’t need any surgical interventions. She also reassured us that Izzy’s breathing was not in danger, and we didn’t need to worry about her struggling to get a breath.

Right now, Izzy is 5 and a half months, and the squeaky breathing has definitely subsided. She still does it from time to time, but it’s nowhere as bad as it was when we took her to the ER. It was definitely a scary couple of days, but I was so relieved to learn that it was a super-common condition, and that it wasn’t a danger to her.

I wanted to write this post in case any other moms out there are experiencing something similar with their little ones, and to reassure you all that it will be OK! Of course, it’s always important to see a doctor and get checked out, because every baby is different, and some babies do require surgical interventions in order to be fully healthy. If only babies could talk to us and tell us what’s wrong, right? It’s like having a pet…only one that cries constantly and deprives you of all your sleep. At least they are cute…and fill us with so much love.

In the comments, tell me: Did you experience anything like this with your baby? And/or: What do you do to keep calm when your baby isn’t feeling well?